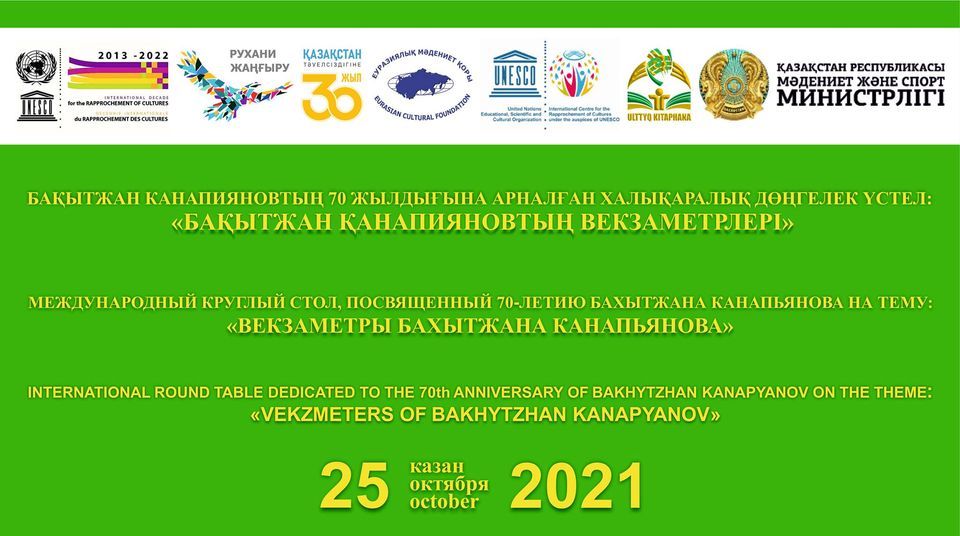 The round table will be held on October 25, 2021, online -for foreign and nonresident participants and in combined mode for participants from Almaty.

The purpose of the round table is to reflect and explore the literary and socio-political ideas and values in the lifework of Bakhytzhan Kanapyanov. Such an approach will integrate the scientific, cultural and educational aspects of the event with the celebration of the anniversary of the poet at the international and national level.

Bakhytzhan Kanapyanov - poet, writer, screenwriter, author of over forty books released in the publishing houses of Kazakhstan, Russia, Ukraine, USA, Great Britain and Malaysia. His poetry translated into many languages of the world, included in literary anthologies of neighboring and distant foreign countries. He is also an author of the idea of celebrating the World Poetry Day. Winner of a number of international literary prizes, including “Alash", "Tarlan", the World Poetry Competition (New York, USA). Honored worker of the Republic of Kazakhstan (2011), Honored worker of the Republic of Kazakhstan (1998), winner of the popular vote "Yel Tulgasy" - "Name of Motherland" in the category "Culture and Art" (2012), Winner of the All-Russian Prize named after Anton Delvig (2013), winner of the Kazakh PEN club award named after Mukhtar Auezov (2014), Winner of the State Prize for Literature named after Abay (2020).

Member of the Kazakh and Russian PEN clubs, academician of the Crimean Literary Academy (Simferopol, Republic of Crimea), Academician of journalism of Kazakhstan, holder of the Honor "For contribution to culture" of the International Committee of Peace and Harmony (Moscow), board member of the European Congress of Writers –representative person of Central Asia and Kazakhstan, (Prague), own correspondent of "Literaturnaya Gazeta" (Moscow) in Kazakhstan. In 2021, Bakhytzhan Kanapyanov has been awarded by the Honor of the European Academy of Sciences and Arts.

Contacts of the Organizing Committee:

International Centre for the rapprochement of cultures info.crc-kz@mail.ru

We would be grateful for the dissemination of this information to interested parties.